In 2005, HEFCE funded 74 Centres for Excellence in Teaching and Learning (CETLs). In 2010, the funding ceased and most of those CETLs went off the boil. SOLSTICE was originally founded as a CETL at Edge Hill University (based in Ormskirk in Lancashire) but was kept running from central funding. The centre supports learning and teaching within the university and also runs two conferences a year. One of these, the SOLSTICE conference, has been running since 2006, and originally focused on technology-enhanced learning. More recently it had been run in parallel with its internal learning and teaching conference (CLT) and now they are effectively merged into separate strands within the same conference.

In 2011, I did the opening keynote at the conference (my first ever keynote!) and in 2016, to celebrate the 10th anniversary of the conferences, all the previous keynote speakers were invited back in a sort of all-star line-up. We were also all made either Visiting Fellows or Visiting Professors of Edge Hill University. That team has dwindled slightly over the ensuing three conferences, but it’s still a connection I like to maintain, so while they keep inviting me, I keep going.

I’ve not had any research projects for a couple of years, so finding new things to talk about has been a bit tricky. In 2016, I contacted a lot of my friends who had been in Second Life, to find out how innovating in a particular field had had an impact on their careers, with some interesting results. Last year I did a comparison between three online courses, two from commercial providers and one from Oxford Brookes. The two I was evaluating were two I happened to be attending as a student; the Brookes one happened to be one I’d created.

This year, looking around for a subject matter, colleagues in LTI suggested I do it drawing on conversations I’d been having about how the landscape for distance learning is changing now that lots of other universities are doing it, and innovating in it, and what the OU’s response might be to this.

Each presentation I’ve done at SOLSTICE has involved less and less content from me and more and more input from the audience, mainly because each year I’ve had less and less to say, but reassured by my discovery that participants prefer to talk to each other than listen to a speaker. 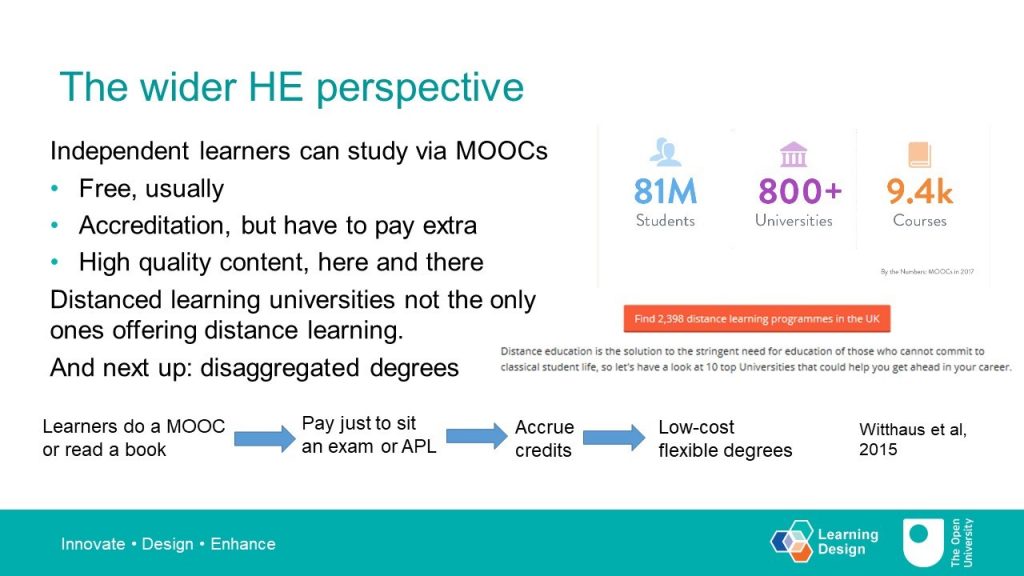 This year my presentation consisted of only one slide of content (figure 1), but followed by a series of questions that colleagues Katharine Reedy and Wayne Holmes helped me put together. These covered a discussion around the importance of social learning in online learning, the relative merits of research versus teaching and how distance universities in particular can generate income. I picked a Choose Your Own Adventure™ format, in that the idea was that the presentation would branch depending on which selection the group made as a whole. The scenario is shown in figure 2. 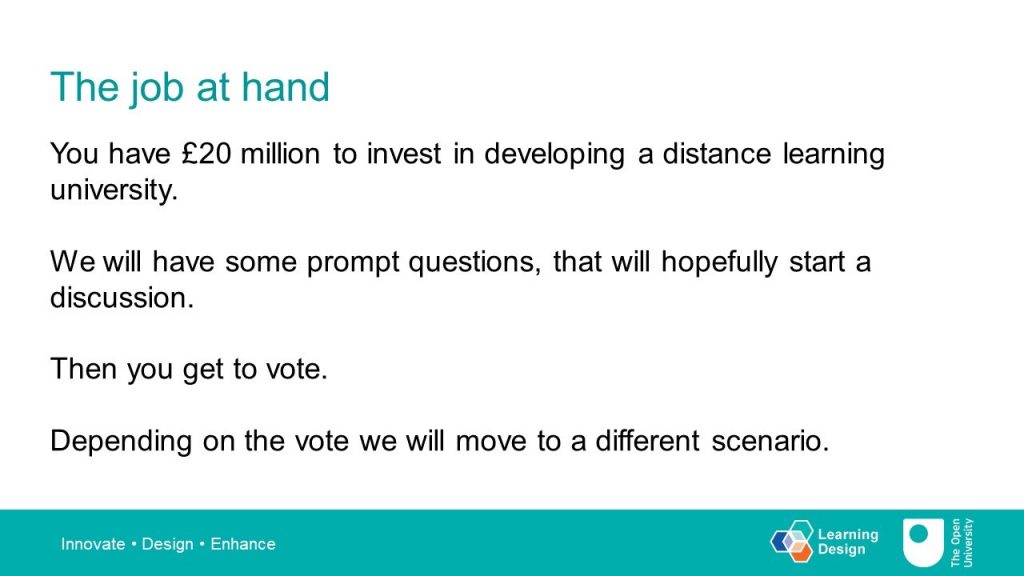 I planned to have the participants post their responses in Mentimeter, then use that platform for voting, but when putting the presentation together (the day before of course) discovered that the free version only lets you create three slides. This meant the discussion had to be all done verbally which means some voices dominate, but the voting was all done in Menti.

The feedback on the approach was that it was really appreciated, and I got some very positive comments from the conference chair about how much it was enjoyed.

Specific comments that came out of the discussions were:

Part of the rationale perceived by learners for distance learning universities is the opportunity to learn independently. However, the value of social learning is so high, and the importance of learners becoming adept at collaboration and gaining awareness of wider, even global, social issues through contact with others is so great, and the greater retention that comes with a sense of belonging to an institution is so marked, that our courses have to contain this as a key element. Through discussion a compromise emerged that we should enable and support students to work through their education independently if they so wish, but they won’t get all the marks that are going.

The biggest learning point for me (one of those that seem obvious in retrospect), is that the social learning that occurs in a distance learning university isn’t all within the online communication platforms. I’d also included other online platforms such as Facebook and Twitter as arenas where social learning occurs, but also we can think of it as what you talk about with your mates down the pub; it’s not just what takes place with other students. I obviously need to get out more. Anything which enables you to bounce ideas off others, share what you’ve learnt, develop reflections on your own understanding through reflections with others, is social constructivism. We don’t have to engineer it within our courses. The question then becomes how do we scaffold, capture and (aggh) assess this.

I had a request actually to do my session next year on social learning, which will make it easier to pick a subject if they ask me back.

The third point that came out of this session was the costs of production. A good point raised was should we be producing lots of original content in our courses when so much is out there already? It would be far more effective to link to pre-existing content where it is relevant, and focus on providing the educational wrapper around this; explaining it to students, entering into a dialogue about it with them, encouraging their own explanation, plus of course, assessing what they’ve learnt. The unique elements of the content would then be a top-up of the external elements, based on the research of the academics on the course. Drawing generic stuff from outside, and focusing on a few key unique areas for original content, but providing the teaching around this content could be a model for all universities, in fact. There are plenty of wheels out there, there is no point reinventing any of them.

So, plenty of food for thought, and definitely feel this is a format that would work in the future.

What was really surprising though was that, obviously, this wasn’t a branching presentation. Irrespective of what people chose, the follow-up question was the same. The answers were entirely predictable anyway (given the options of one of two things, or a bit of both, people will always go for a bit of both) but everyone fell for it. I had quite a few people ask me what the alternative branches were, but I never really intended there to be any. The point being: whatever you do it doesn’t really make a difference anyway.